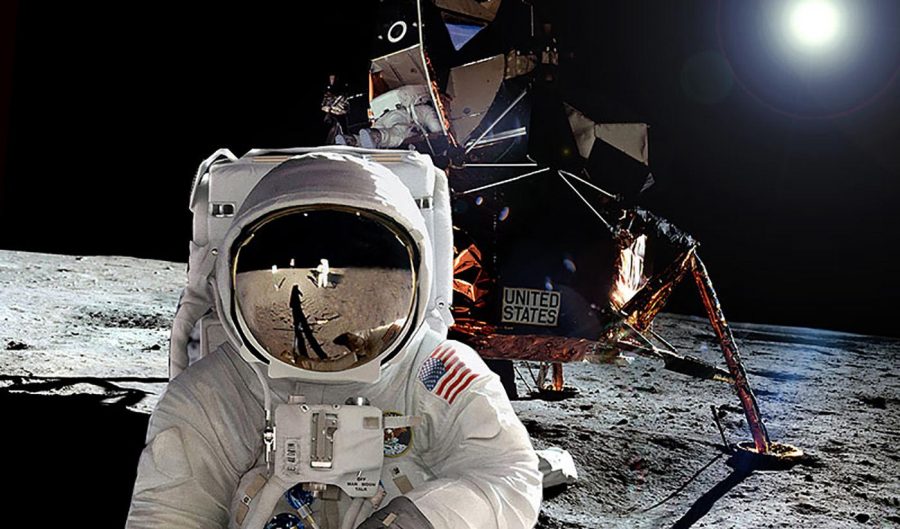 Fact or Fiction? In 1969 the Apollo 11 moon landing ends the ongoing Space Race with the USSR. After increased political tension, the United States claimed victory with Neil Armstrong's historic first steps on the moon.

On July 20, 1969, the nation watched as Neil Armstrong took his historic first steps on the moon. The black backdrop silhouetted the first astronaut to ever venture onto the porous and pockmarked surface. Armstrong took that “one small step for man, one giant leap for mankind” and planted an American flag within the cracked layers of the ground.

Or did he? Was the grandeur of this moment staged in a stuffy studio with meticulously placed cardboard cutouts and counterfeit rocks?

As one of the most controversial and hotly contested conspiracy theories, the Apollo 11 moon landing ended the Space Race with the United States claiming victory over the USSR. Because of what was considered suspicious timing, conspiracy theorists worldwide have raised questions about the validity of this mission.

Many years after the triumphant landing, retired U.S. Navy officer Bill Kaysing questioned the plausibility of the trip in his book, We Never Went to the Moon: America’s Thirty Billion Dollar Swindle. Kaysing was the first to publicly suggest that the entire moon landing was fake.

Kaysing’s book claims that the chance of a successful crewed landing on the Moon was calculated to be 0.0017% and that despite close monitoring by the USSR, it would have been easier for NASA to fake the moon landings than to actually go there.

Evidence aiding the argument of a fake landing include the photographic and film oddities. In some photos, crosshairs appear to be behind some objects which many conspiracists believe were pasted over the photographs. There are no stars in any of the pictures and the same background is seen in every photo. The angle and color of the shadows are inconsistent which suggests artificial light was used within a studio. The photos taken include two identical rocks with a matching “C” and the biggest question of all: who filmed Neil Armstrong’s first steps.

All these questions do have logical explanations, but conspiracy theorists view the photos as suspicious. NASA specialists and some outside experts claim that these details are consistent with that of a real moon landing.

Phil Plait in his book Bad Astronomy counters these suspicions with the argument that the Soviets were too advanced in their technology to believe a fake moon landing and that this hoax only aided the USSR as propaganda.

Additionally, the photos don’t feature any stars because the pictures are daylight exposures with the moon’s surface brightly illuminated by the sun. The shadows are seeming off because the sun isn’t the only source of light with the reflective surface of the moon.

Lastly, this mission was independently tracked by Russia and England, both of whom sent letters of congratulations to the U.S. government.

Rick Fienburg, the press officer for the American Astronomical Society, presents a logical argument when considering these perceived anolmolies. “About 400,000 scientists, engineers, technologists, machinists, electricians, worked on the Apollo program,” said Fienberg. “If in fact the main motivation for believing in the moon hoax is that you don’t trust the government, you don’t trust our leaders, you don’t trust authority, how can you feel that 400,000 people would keep their mouths shut for 50 years? It’s just implausible.”

After much public discussion and scrutiny, NASA released a fact sheet in 1977 titled “Did U.S. Astronauts Really Land on the Moon?” in an effort to silence the conspiracies. In this statement, NASA said, “Apart from the fact that millions of people saw the Apollo series on television and heard them on radio in real time, perhaps the lunar material is as irrefutable proof as any that the Moon missions were not ‘faked.’”

Nonetheless, the belief of a staged moon landing has gained much traction with six percent of Americans believing the Apollo 11 mission to be a hoax, according to CNN News. Conspiracy theorists contend the moon landing was simply propaganda by the U.S. government to assert superiority over the USSR.

Conspiracy theories typically gain popularity as a source of entertainment, but it is important to remember the facts. These conjectures are often disqualified as news with contradicting evidence and shaking arguments.

According to journalist Roger Cogen, “Conspiracy theories are the refuge of the disempowered.” This often irrational thinking can taint the truth and cause widespread mistrust in a group or system. As a reader, it is important to filter information before adopting it as truth.

In the post-Watergate era, the fake moon landing theory gained popularity with spin off conspiracies and government cover-ups. The Watergate scandal developed from a break in at the Deocratic National Committee headquarters in 1972 which led to the discovery of Nixon’s blatant abuse of power; this cover-up fostered skepticism with the American public for decades to come. This mistrust fueled varying conspiracies including doubt surrounding the Apollo 11 moon landing.

Whatever the truth may be, the photographic evidence is incriminating, a successful mission to the moon was nearly impossible, and the timing of the event raises suspicion to even the most founded rebuttals. However, was all this possible with the watchful eye of the world? Neil Armstrong said, “There are great ideas undiscovered, breakthroughs available to those who can remove one of truth’s protective layers. There are places to go beyond belief.”

More about the Apollo 11 moon landing.