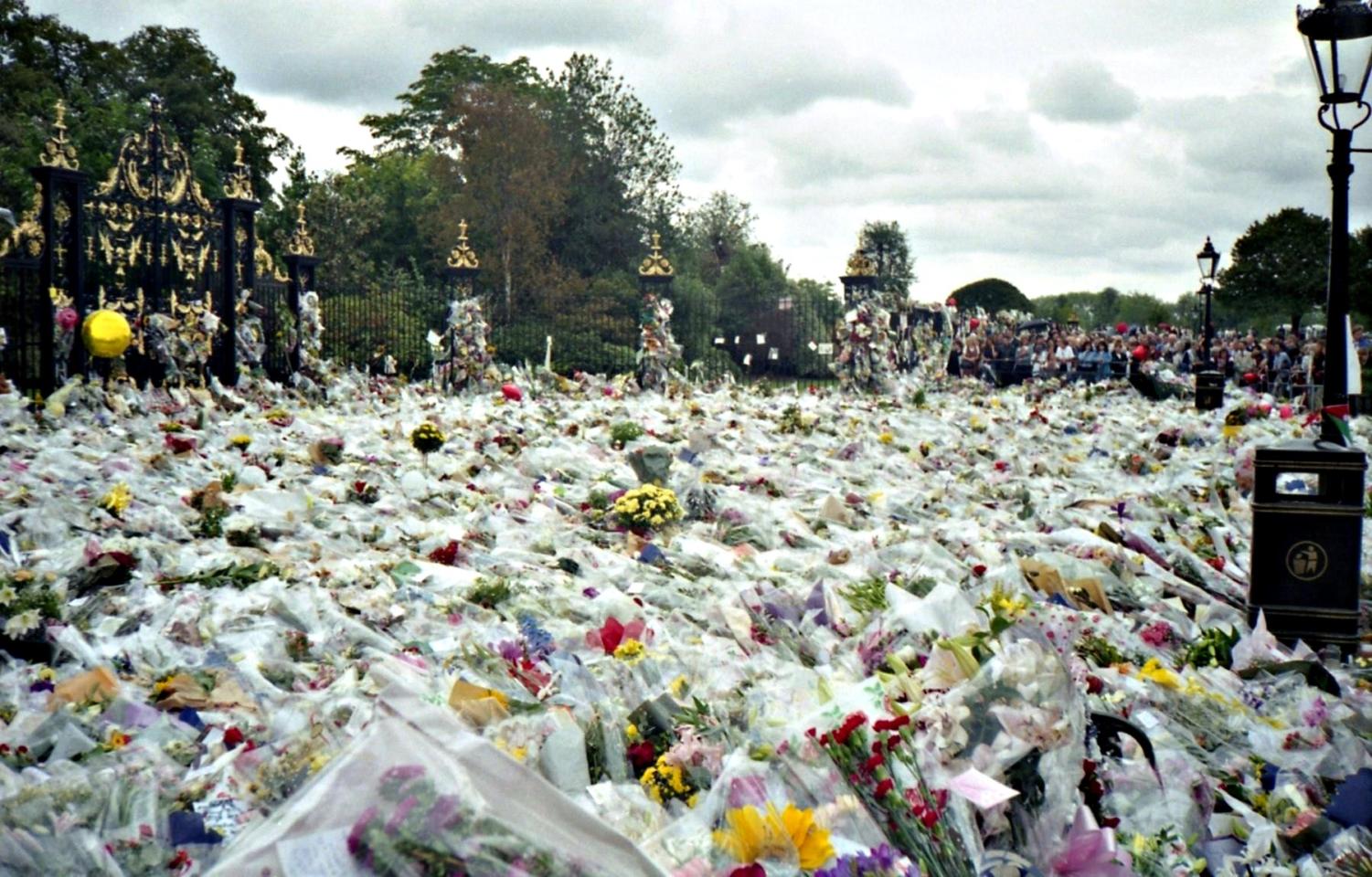 Buckingham Place overflows with flowers adoring the late Princess Diana. Known as the “people’s princess”, Diana’s charismatic personality deeply resonated with the British public. Mourners were sighted outside the palace weeks after her death.

Buckingham Place overflows with flowers adoring the late Princess Diana. Known as the “people’s princess”, Diana’s charismatic personality deeply resonated with the British public. Mourners were sighted outside the palace weeks after her death.

A high speed chase, a pack of paparazzi, two high profile lovers, and one fatal crash.

On August 31, 1997, Princess Diana of Wales lost her life in a car accident after a high speed paparazzi chase inside the Pont de l’Alma tunnel in Paris.

Flags at half mast, on air broadcasts of Great Britain’s national anthem, flowers overflowing at national sites, and citizens gathered outside her hospital, all to commemorate the life that once was.

On a hot summer night, Princess Diana and her boyfriend, Dodi Fayed, were swarmed by paparazzi with news of their affair breaking just a few weeks earlier. The two had been the talk of the tabloids fueled by an impending engagement and potential pregnancy.

The pair stayed at the Ritz Carlton Hotel in Paris and directed their driver, Henri Paul, to evade the paparazzi who awaited them. They snuck out of the back into a blacked-out mercedes with cameras capturing the last moments of Diana’s life.

Relentless, the paparazzi chased the couple causing the car to crash into the tunnel’s side wall. Glass shattered, smoke billowed, but cameras still flashed capturing the deadly scene.

Britain’s symbol of strength and grace vanished in a matter of minutes with their beloved Princess dead in a tragic accident.

Or, was this an orchestrated murder by the jealous royal family to end the public devotion to the newly-divorced Princess?

After her death numerous conspiracies circulated, but all agree with one fundamental belief: someone wanted to kill Princess Diana and they orchestrated the fatal car crash.

The role of the paparazzi has also become part of conspiracy theories. Stephane Darmon, a motorcycle rider for one of the paparazzi who chased the couple’s car through Paris, opened the door of the Mercedes and declared the princess was still alive.

Darmon said he expected the paparazzi to help the passengers of the vehicle but was shocked when they started taking photographs. “I did not see the car any more because the light [of the flashes] was so bright. It was continuous.” Witness’ say that photographers climbed onto the car in which Diana, Dodi and Paul lay dying and took pictures instead of helping them.

In the CCTV footage of Paul, the couple’s driver, on the night of the incident, captures him raising his hand to wave at paparazzi which prompts them to raise their cameras.

The images sparked beliefs that someone in the hotel was tipping off the paparazzi as to the princess’s movements. There was also speculation that a white Fiat Uno, which was believed to have collided with the Mercedes, was driven by a photographer.

According to Mohamed al-Fayed, the reason for the killing was that Diana was allegedly pregnant with his son’s child which, he believes, was distasteful to the royals. In the weeks before her death, Diana made comments about a “big surprise” leading many to assume she was with child.

The biggest motivating factor behind the conspiracies is the belief that Diana thought she would be killed. Which can not be refuted according to Paul Burrell, Diana’s one time butler, who received a letter from the Princess herself.

“I am sitting here at my desk today in October, longing for someone to hug me and encourage me to keep strong and hold my head high. This particular phase in my life is the most dangerous. […] is planning ‘an accident’ in my car, brake failure and serious head injury in order to make the path clear for Charles to marry,” it read.

Princess Diana had a long history of opposing the traditions of the monarchy. She didn’t follow many of the strict guidelines royals are expected to adhere to. As the people’s princess, Diana led with humility and went out of her way to serve the surrounding community. However, the rebellious spirit that the public admired, created disdain within the royal family.

“I do things differently because I don’t go by a rule book, [and] because I lead from the heart, not the head,” said Princess Diana.

Towards the end of her life, Diana did a notorious interview which was referenced often after her death. Her husband’s affair was common knowledge and the royals had leaked horrible rumors to the tabloids; Diana had enough.

In this interview, Diana detailed the mistreatment by her own family and threats of taking away her title if she didn’t “behave”. She revealed the difficulties of marriage with her husband’s affair and even questioned if Prince Charles had the character to be king. She detailed her hidden struggle with bulimia and how her family knowingly chided her for wasting food.

“I was crying out for help, but giving the wrong signals, and people were using my bulimia as a coat on a hanger,” she said. “They decided that was the problem — Diana was unstable.”

The Monarchy received heavy criticism in light of Diana’s allegations. And in an attempt to stay face, the royals spun stories to render Diana as uncouth and delusional; however, that was not the case. Princess Diana sat poised and fully articulated her point with the eyes of the world watching.

Had the royal family put a stop to this public humiliation? Permanently?

With questions circulating, the Met police launched an investigation to weigh the validity of these claims. 175 theories were investigated regarding that fateful night, but none of them found true.  Even the alleged pregnancy was debunked when the post-mortem examination came back clean.

This investigation lasted years, cost millions of pounds – and found that all that happened that night was an incredibly unfortunate accident.

Diana’s death was felt around the world and in the ensuing years. There was an outpouring of grief from the public who sought the responsible party for this horrible “accident”.

In the weeks after her death, counselling services reported an increase in phone calls of clients seeking help grieving the loss of a public figure.

Suicide rates increased 17 percent overall and 45 percent in middle aged women due to their identification with her “charitable endeavors” and “ability to identify with ordinary people” according to the British Journal of Psychiatry.

Britain’s symbol of strength and grace vanished in a matter of minutes with their beloved Princess dead in a tragic accident.

If you want a picture to show with your comment, go get a gravatar.